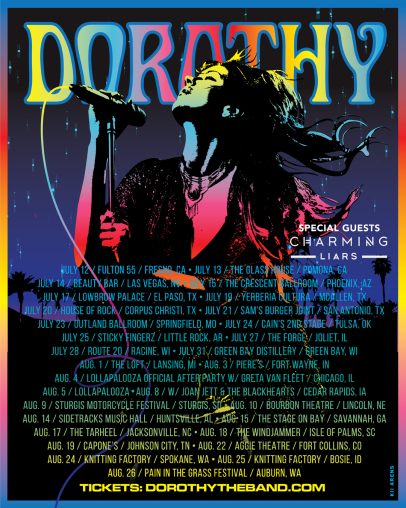 If you haven’t heard of the L.A based rock band Dorothy, then you’ve been living under a rock.  Dorothy Martin singer/songwriter and front woman of Los Angeles rock band Dorothy, is signed to Jay Z’s label Roc Nation and managed by none other than the legendary Linda Perry, We Are Hear. We Are Hear is a combination record label, publishing house, and management company founded by Linda Perry and Kerry Brown.

Dorothy has gained a loyal following since the release of their 2014 self-titled EP and their 2016 debut studio album ROCKISDEAD thanks in part to “Wicked Ones” and “Raise Hell”. However, on the sophomore effort 28 Days in the Valley, some of that grit has given way to a new sense of grandeur, and a lot of that is due to producer Linda Perry.

“It’s about an ex who really did a number on me. This one came fast to me. It was very subconscious… like I’m channeling them. Linda Perry pulled the lightness out of me, both personally and musically. This record is definitely still bold, but it’s happier. It’s kind of like the butterfly coming out of the cocoon.” (via Artist Waves)

Her hit song “Flawless” is playing on the radio across the U.S. It has reached the Top 10 on Billboards Mainstream Rock chart and reached #8 last week. The team at Roc Nation, We Are Hear & Precog Media aided the efforts in promoting and supporting her sophomore album and pushing their song “Flawless” to reach the charts.

Dorothy has recently performed at Summerfest, Arroyo Seco, MMRBQ  and recently finished touring in May with Greta Van Fleet, which have been compared to the iconic rock band Led Zeppelin. Dorothy is now on tour with Charming Liars who is supporting the band. Her Freedom Tour kicked off in Fresno on July 12th and will end in Washington August 26th.

While many people say that rock is “dying out” or “rock is dead” but Dorothy has proven that rock is ALIVE and well!

For tickets and info on the Freedom Tour, go to dorothytheband.com